Download Acrobat Reader 5.0 or higher to view .pdf files.
Welcome back!
Log in to your account.
Online Banking Solutions
Remote Deposit
Lockbox
Credit Cards
Trust Portal
What can we help you find?

Building the Next Generation: Creating A Culture of Resilience, Discipline and Integrity

When Kenny Vallespin enlisted in the military after he graduated from high school, he never could have anticipated the life-changing experiences that were in store for him as a member of the US Army. He enlisted with the goal of serving our country for the opportunity to earn a college education. But days after completing his basic training, the September 11th attacks occurred and everything changed. The War on Terror began, and Kenny was on a plane to Afghanistan with his comrades—one of the first ground units sent to defend the United States against our new foreign enemy.

The next eight years of Kenny’s service that followed challenged him to grow in previously unimaginable ways. Aside from traveling the world as an active-duty soldier in Afghanistan for four years, and then a member of the active National Guard with the US Army South in Latin America, Kenny attributes his management skills and invaluable life lessons to his days in the US Army.

In honor of Veteran’s Day, we asked Kenny to share what his experience meant to him, and how his philosophy on leadership is shaped by his years in the military.

How would you describe your experience in the military?

I came from very humble beginnings and I couldn't go straight to college, so I joined the military. I was planning on only serving four years. But then 9/11 happened, and we were one of the first ground units to go to Afghanistan.

My personal mission in the military very quickly shifted from a way to pay for college, to one of pride and service. There was an attack on the United States, and I swore in to defend our country from enemies foreign and domestic. Our country’s freedom was in jeopardy, and I felt honored to help defend it.

How did your time in the military train you for leadership in your civilian corporate life?

The biggest thing that the military did for me was that it taught me structure. I was an amateur boxer prior to joining the military, and I had just enough discipline to support my motivation to win fights, but I really had no structure. The military came with much more discipline and structure, and learning that was a winning combination for me to increase my effectiveness in all aspects of my life.

I also learned the ability to fail forward and to not get discouraged when I fall down. Stagnant water stinks. If our bodies are made up of over 75% water, that means we're never meant to stay stagnant. We're never meant to stink. We are meant to always get back up and keep moving forward.

What are the parallels you can draw between the values you learned in the military and the values of our bank’s culture?

Our values are integrity, service and ownership. Integrity is one of the most impactful values I learned in the military. It shaped your trustworthiness as a comrade, because when the battle is on, you need to trust your buddy and they need to trust you. In order to be trustworthy, that starts with integrity—doing the right thing when nobody else is looking.

As far as service, people join the military to serve. Now, being able to serve not only our fellow partners within Texas Partners Bank, but to serve our local community is at the heart of what we do.

Ownership I learned with the willingness to fail forward. To own mistakes, correct them, and then move on. We do that every day here.

Are there elements of your training that you still lean on in your work with Human Resources?

Yes. The number one thing is that I'll never ask anyone to do something that I'm not willing to do myself. If I told someone in the military to do 50 pushups, I'd get down there and do 50 pushups with them. I think my management style reflects that. We might have to tackle a project that requires a learning curve, but I would never ask my team to do something I haven’t tried to learn first.

Looking back on your time in the service, what were you most proud of?

I’m most proud to be able to say that I served my country when my country needed me most. It was war time. And while a lot of people were sitting comfortably here, I was on the front lines. We were in the desert doing a lot of things that most people took for granted. When I would call home, I'd ask my mom what she was doing, and she'd say, "I'm getting ready to go to a party, what are you doing?" My response was often something like, "We're probably going to work all night because we have to get a tank up and running with their comms system.” Two entirely different worlds. But I’m proud to have done it.

How did your experience with learning how to be comfortable with being uncomfortable help you pave a path to leadership?

What excites you most about your work in Human Resources?

The thing that inspires me most is that I get to be a part of building a generational culture here. On top of the culture, I get to build this position, and build this department generationally. I'm building my next replacement. And my team should be building their next replacements. But we're building on great things. We're building a great culture. I'm passing on positivity, discipline and structure. I’m very proud to be a part of that.

Related News From Our Partners

The Bank of San Antonio

The Bank of Austin 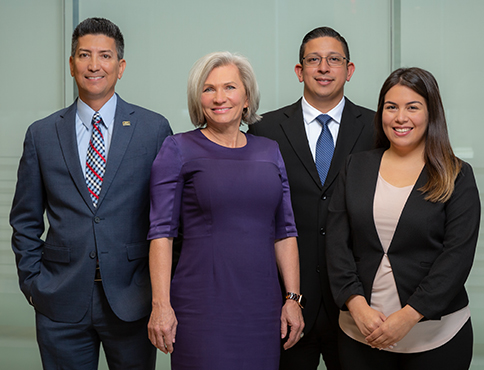